Is possession data getting more extreme?

The possession metric is probably one of the football statistics which is cited most often. It has gained even more media attention since we have seen larger divergence in possession across teams. Oversimplified game approaches of teams are often broadly categorized between possession-oriented and counter-attacking: think about Barcelona/Bayern Munich/Manchester City vs Chelsea/Borussia Dortmund/Liverpool.

At first glance the possession statistic seems to be fairly trivial: who controls most of the ball during the 90 minutes? There are however some details that can have quite an impact on the final number. The simplest approach is to approximate possession with touches. This can however favor teams that try to play short and controlled passes and prefer a slow build-up play. On the other extreme you could try to assess possession for every second of the game and even interpret a uncontrolled clearance as giving up possession. The OptaPro Blog has written a very good article on this exact topic.

In this post I want to look at some values of this statistic across time and leagues. The possession numbers are a very powerful statistic and tell a few interesting stories.

How has the dispersion of possession changed over time?

Below chart shows the average difference in possession within each league across time. A value of 20% means that, on average, the team with the higher possession has 20% more of the ball than the opponent, i.e. a 60/40 possession split. Over the last eight seasons we can oberserve an upwards trend in this statistics across all top European leagues. One explanation may be the growing dispersion in the quality of teams which has been fueled by outside investors, Champions League price money and ever more highly renumerated broadcasting contracts. Less well off teams may not be able to compete at eye level anymore and need to give up possession to reduce their game to a stable defence and a counter-attacking approach. 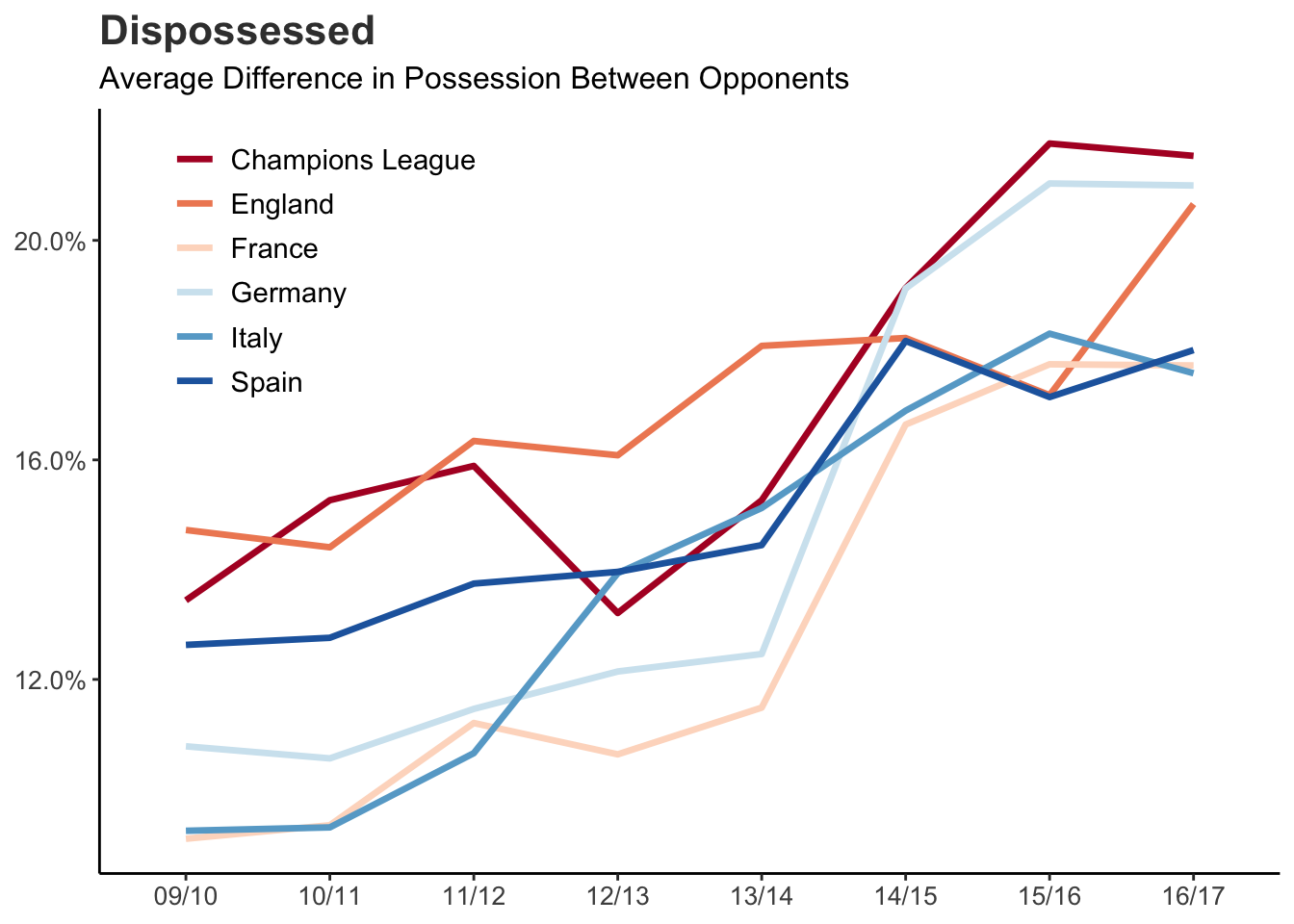 The results are similar if we focus on the extremes and only consider games in which one team captures more than 70% of possession. While these games were only outliers a few years ago (0% to 2.1% in 09/10) this is now much more common (4.8% to 13.7% in 16/17). The leagues that are spearheading this development are the Champions League and the Bundesliga. This does not match the Champions League’s ideal of being the elite league of European football. For the Bundesliga it reinforces the fear that there is little competition apart from Bayern and maybe Dortmund. 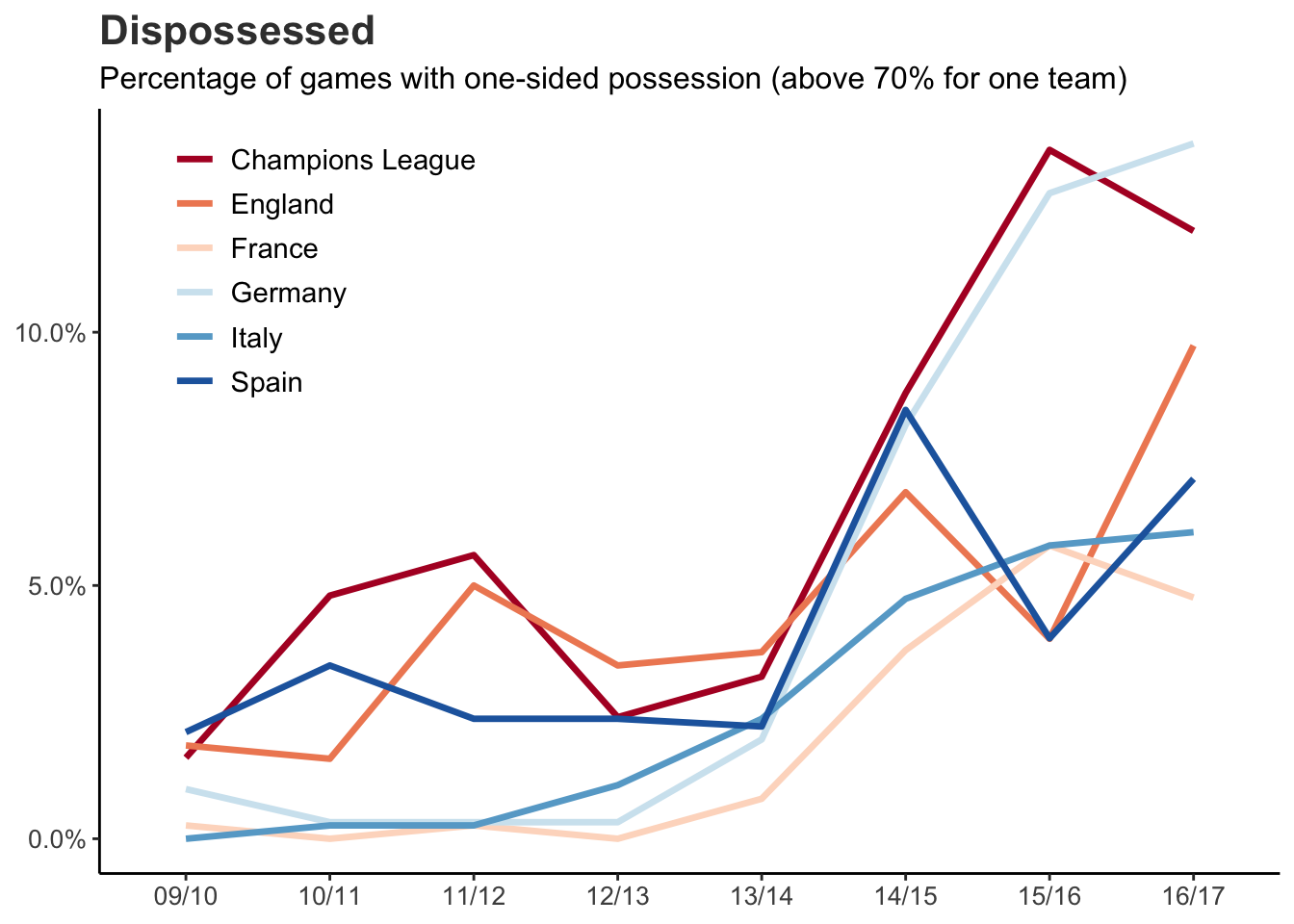 Which teams and managers are driving the trend to extreme possession?

Below chart highlights the dominance in term of possession that both Bayern and Barcelona have. Bayern is responsible for over half of these extreme possession games in the Bundesliga while they also contribute a large chunk in the Champions League. For Barcelona the story is similar while their contribution in La Liga and the CL is even higher. Interestingly Real Madrid do not have this dominance on the ball, neither domestically nor internationally. The Premier League and the Serie A seem much more balanced at least at the top. For the PL the chart highlights however the dominance of the Top6 as the number of games with extreme possession is fairly high. For France, we can observe the recent dominance of PSG but the league seems overall relatively balanced. 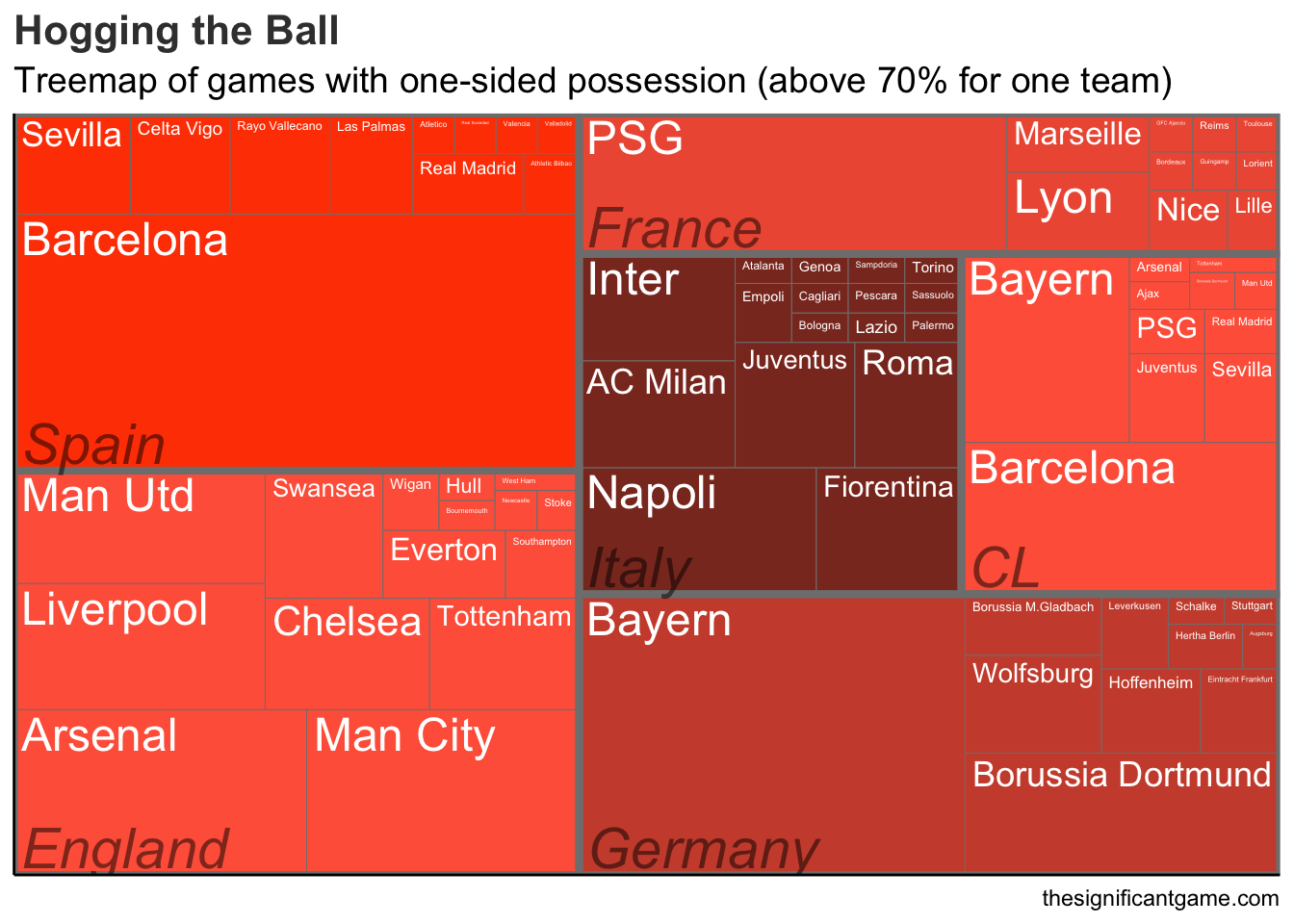 Restructuring the chart by manager instead of team shows the importance of Pep Guardiola for this development. He is featured across La Liga, the Bundesliga, the Premier League and the Champions League. Another interesting aspect is the data for Thomas Tuchel. It shows how he transformed Dortmund into a team focussed on possession away from Jurgen Klopp’s counter-attacking gegenpressing style. 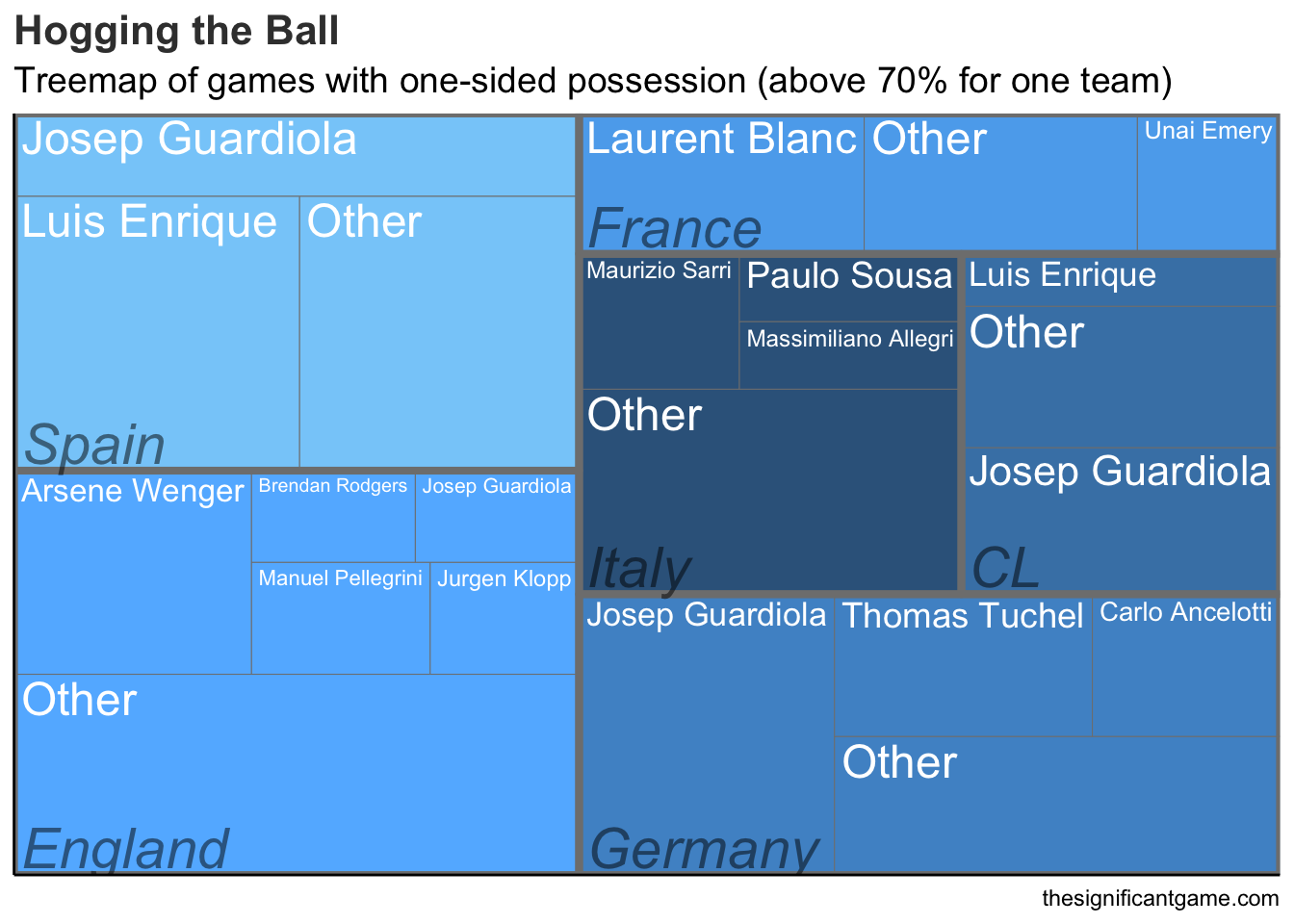 What is the largest difference between possession in the first and second half of the same game?

We are looking at possession data across the top five European leagues, the Champions League and the Europa League for the seasons 09/10 to 16/17.

This story is also picked up by the coaches in the post-match commentary: Bournemouth’s Eddie Howe: "I thought the second half was everything we wanted the first to be. We were off the pace in the first half and Southampton played well. It was a reverse in the second but all that was missing were goals. (Source: bbc.co.uk)

Overall we can expect a few things to cause these large differences in possession stats between two halves: a clear results in the first half will entice the leading team to sit back, defend and wait for counters. If a player is sent off the decimated team often has no choice but to drop back and prioritize defending. Both teams should also be roughly on the same quality level. A superior team will still be competitive even with one man down and will also not be too concerned with giving up a lead.

We observe similar events in the other Top6 matches with the highest possession shifts:

Against Auxerre, Ajaccio was up 2:1 at half-time but one man down (it actually was 9 against 10 at this stage). Crystal Palace was trailing 0:1 at half time and dominated the second half to equalize in the 92nd minute. Against Bordeaux, Ajaccio was ahead 1:0 at half time and quickly lost a man to a second yellow card into the second half. Bordeaux switched their 4-4-2 to a 4-3-3 at half-time to increase the pressure on the home side. Inter was dominating the first half against Verona with close to 80% possession and going into half time with a 2:1 lead. Medel was sent off in the 50th minute and Verona scored the equalizer in the 88th minute. Arsenal was up 3:0 at half-time and after losing their keeper Szczesny they were happy giving the majority of possession to Galatasaray.